The ATJRC is a statewide training and technical assistance (TTA) center established in the fall of 2019 with funding from the Department of Justice, Bureau of Justice Assistance. The ATJRC was organized to respond to the unique, unmet and emerging training and technical assistance needs of Alaska Tribes and tribal organizations involved in developing and enhancing their respective tribal justice systems. The ATJRC collaborates with our two sister TTA programs which provides similar services to: Tribal Youth Programs and Tribal Juvenile Healing to Wellness Courts through the Resource Basket which is funded by OJJDP, Domestic Violence Full Faith and Credit training funded by the OVW, and Victims Assistance Programs funded by the Alaska Denali Commission. 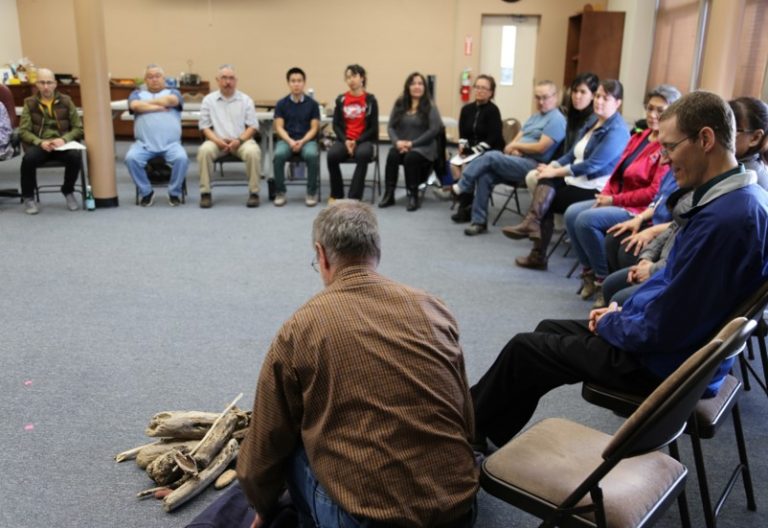 Many key organizations provide training and technical assistance to Alaska Native communities.  Tribal justice systems are working together to coordinate service delivery and assess the need for new resources and services.  The Alaska Tribal Justice Resource Center is at the hub of a powerful network.

ATJRC collaborates with the following Alaska and national partners.

Alaska Legal Services Corporation (ALSC) was established in 1967 as a private, nonprofit law firm. ALSC offers free civil legal services to low income and disadvantaged people to protect their safety, their health, and promote family stability. We are dedicated to bridging the statewide gap between those who need civil legal help and those who are able to get it. We have an unwavering and longstanding commitment to assuring that Alaska’s rural communities have access to the justice system. Through advocacy, education, collaboration and litigation ALSC empowers individuals, protects fundamental rights, strengthens communities, creates opportunities, and achieves justice.

The Alaska Native Justice Center (ANJC) was established in 1993 by CIRI as a tribal non-profit to address Alaska Natives’ unmet needs regarding the Alaska civil and criminal justice system in response to the increasing disproportionate rates of victimization, incarceration and other justice-related issues impacting Alaska Natives throughout Alaska.

The Association of Village Council Presidents

The Association of Village Council Presidents (AVCP) is a regional non-profit tribal consortium comprised of the 56 federally recognized tribes of the Yukon-Kuskokwim Delta.  The geographic boundaries of AVCP extend from the Yukon River village of Russian Mission downstream to the Bering Sea coast, north up through Kotlik and south along the coastline to Platinum, and then extending up the Kuskokwim River to Stony River, including Lime Village on the Stony River tributary. The area encompasses approximately 6.5 million acres, or 55,000 square miles, in Southwest Alaska.

Kawerak works hard to meet the needs of the people of the region through strong collaboration and cooperation with all 20 tribes, our regional medical center, and our Elder’s wisdom and expert guidance. The scope of service and work is wide but our mission keeps us united and focused on meeting the identified needs and working together to engage in this mission. Kawerak is truly empowered by the unity of our Tribes to serve our people, and we do this through facilitation and partnership. Lastly, we are guided and sustained by our traditions, values, and Native culture, all of which we hold dear and work to keep alive and integrated in all that we do.

We are organized as Dena’ Nena’ Henash or “Our Land Speaks”; an Alaska Native non-profit corporation, charged with advancing Tribal self-determination and enhancing regional Native unity. We provide services while balancing traditional Athabascan and Alaska Native values with modern demands. We work toward meeting the health and social service needs of Tribal members and beneficiaries throughout our region.

The Juvenile Justice and Delinquency Prevention (JJDP) Act established OJJDP, a component of the Office of Justice Programs, U.S. Department of Justice, to support local and state efforts to prevent delinquency and improve the juvenile justice system. OJJDP collaborates with professionals from diverse disciplines to improve juvenile justice policies and practices by supporting states, local communities, and Tribal jurisdictions in their efforts to develop and implement effective programs for juveniles. The Office strives to strengthen the juvenile justice system’s efforts to protect public safety, hold offenders accountable, and provide services that address the needs of youth and their families. OJJDP sponsors research, program, and training initiatives; develops priorities and goals and sets policies to guide federal juvenile justice issues; disseminates information about juvenile justice issues; and awards funds to states to support local programming.

The Office on Violence Against Women (OVW)

The Office on Violence Against Women (OVW) is component of the United States Department of Justice. In recognition of the severity of the crimes associated with domestic violence, dating violence, sexual assault, and stalking, Congress passed the Violence Against Women Act of 1994 (VAWA 1994) as part of the Violent Crime Control and Law Enforcement Act of 1994. VAWA is a comprehensive legislative package designed to end violence against women and was reautho-rized in both 2000 and 2005. The legislative history of VAWA indicates that Congress seeks to remedy the legacy of laws and social norms that serve to justify violence against women. Since the passage of VAWA, there has been a paradigm shift in how the issue of violence against women is addressed nationwide.

OVW was created specifically to implement VAWA and subsequent legislation. OVW administers financial and technical assistance to communities around the country to facilitate the creation of programs, policies, and practices aimed at ending domestic violence, dating violence, sexual assault, and stalking.